The Royal Palace is divided into three separated areas:

This was where legal affairs and matters of state were discussed and carried out. In the raised chamber, which could be closed up with shutters, was where the sultan sat and listened to citizens’ demands without being seen. At the back of the room there was a prayer room facing Mecca, richly decorated with plasterwork and overlooking the Albaicín.

After the conquest, the Catholic Kings modified the interior of this room, converting it into a chapel of which the choir balustrade still exists.

The outer walls have undergone so many changes that it is impossible to know for sure what they were originally like. This administrative part of the building has two outer courtyards, the first of which houses the remains of a small mosque with its minaret, whilst the second, known as the Patio de Machuca, is where the Torre de Machuca is situated.

The Mexuar was used as the residence for the architects who worked on building the complex, including Pedro Machuca, who designed the Palacio de Carlos V.

Inside there are the Cuarto Dorado (Golden Room), which got its name from its gold-leaf dome, and the Patio del Mexuar, with the magnificent façade of the Palacio de Comares, decorated with stalactite, plaster and tiles and covered with a cedar wood with engraved motifs such as pineapples and shells. 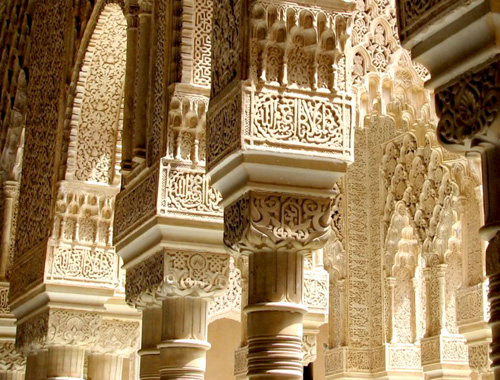 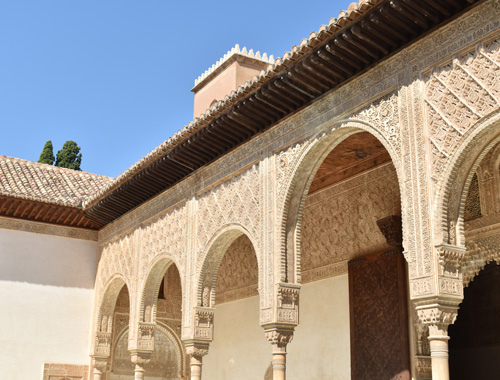 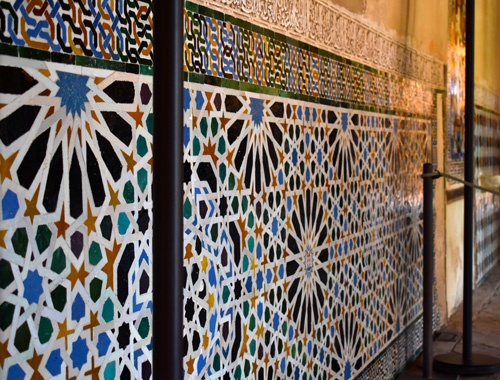 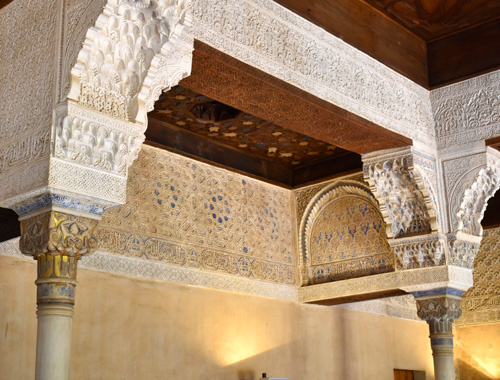 It was built by King Yusuf I to combine the official management of the affairs of state with a private residence of the sovereign. The Patio de los Arrayanesis at the centre of the palace with its porticoes at either end of the gallery. The courtyard has been given a number of names over time. The name Patio de los Arrayanes (meaning myrtle) comes from myrtle shrubs whose vivid green colour contrasts starkly with the white marble floor of the patio.

The Palace is flanked by the Torre de Comares, which houses the Hall of Ambassadors, where the king, accompanied by his viziers, gave formal hearings. The room is square-shaped and its walls are fully decorated with calligraphic motifs, flowers and fruits and geometrical shapes. The starred dome represents the sky. Preceding this space is the Sala de la Barca, at the end of which were the bedrooms of the sultan.

To the east of the palace are the Baños de Comares, built in Muslim style but based on the model of Roman baths. All existing decoration dates to the Christian era, as the poor condition of these rooms meant that they had to be the restored and rebuilt several times over the centuries.

Mohamed V, son of Yusuf I, ordered this palace to be built as a private area for the royal family and the harem. Its name comes from the twelve marble lions that stand at the foot of a fountain in the Patio de los Leones. The area is an allegory of paradise, an oasis with flowing water and 124 columns and arches symbolising a palm grove. This is the first courtyard in which a new architectural style is adopted: two water channels flow from pools located in two large rooms, la Sala de los Abencerrajes y la Sala de las Dos Hermanas.

These rooms face each other and both have superb honeycomb work domes. It is said that in the Sala de los Abencerrajes, the king’s private room, Abencerraje knights were slain, whilst the Sala de las Dos Hermanaswas so called due to the two huge marble slabs on each side of the central fountain which a 14th-century poet once compared to two sisters. Inside is the Mirador de Lindaraja, a small room for the sultan’s favourite. It is one of the most beautiful rooms in the Alhambra.

The Sala de los Mocárabes is the simplest of all the rooms in the Palacio de los Leones. It is situated by the old entrance of the palace and it is named after the Arabic ornamental design in which it was decorated (‘mocárabes’ means honeycomb work). It was demolished in 1590 due to its poor condition and the part that remains is the one that survived an explosion in1590.

The Sala de los Reyes is named after a painting on the dome of one of the three existing buildings that depicts ten monarchs. The hall is divided into seven parts: three square rooms, separated by two rectangular sections and alcoves at each end. The room is entirely decorated in honeycomb work to enhance the light entering the hall. 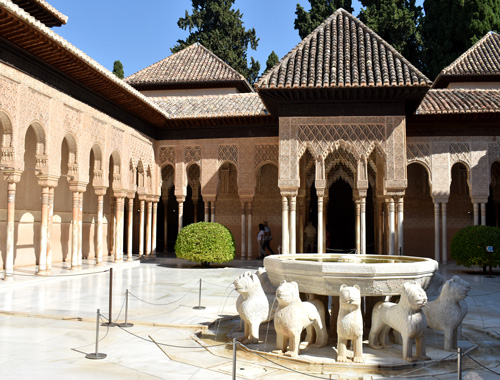 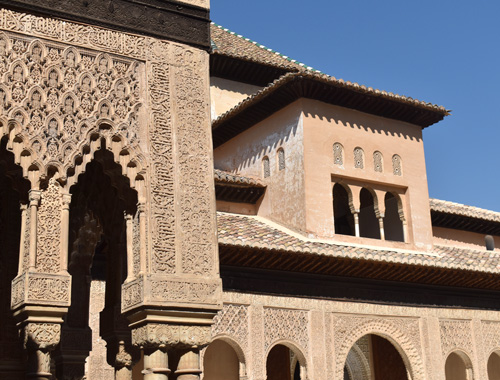 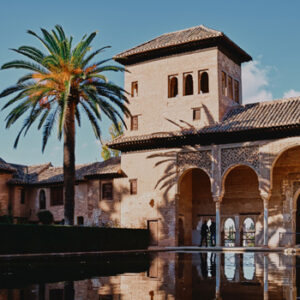